With cost-cutting, GM still not out of woods

Tom Walsh, Detroit Free Press business columnist, warns today that General Motors still has a lot more work to do to continue being a major player as an auto maker.  The health care cost-sharing by retirees and hourly workers is just the start.

Pastor Roy Olsen from my church, Our Savior Lutheran Church in Lansing, MI, wrote in his blog--A Servant's Heart--about some of the new twists being taken in what's being offered for kids to watch and listen to, including Harry Potter.  It's thought provoking about what's being planted in your youngster's head.  He leads an adult Sunday School class at our church on the whole topic of spirituality in today's post-modern world.

This morning--hatred, good or bad

In an hour or so, I will leave for my wife's school for the annual Grandparent's Day.  It's fun watching both the kids and the grandparents.

From Our Daily Bread by Radio Bible Class, I read the devotion today by Haddon Robinson about hatred.  It was based on Psalm 97:10 which says, You who love the Lord, hate evil!  Today, they also have a link to one of their online booklets on Right & Wrong, The Case for Moral Absolutes.  I will probably read that a little closer this weekend.

If you're retired or close to retirement, then you want to read this story from yesterday's Wall Street Journal about the chances that your former employer might reduce your benefits or might charge you more.  It's worth a read.  You'll probably need to be a suscriber to read it online.  You can always read it in the library.

Casinos in Lansing, MI are not the answer

Well, I can say that today's Lansing State Journal editorial endorsing candidates for the upcoming election to the Lansing City Council both informed me and gave me a question to ask as the trip to the polls gets closer

Read down to the endorsement of incumbent Sandy Allen for reelection to the Second Ward.  It says she favors casinos for Lansing.  That's first I've heard of that.  How'd that happen?  Am I spending too much time in the sports section of the paper?

By the way, the LSJ says her proposal is worth a look.  Detroit has already tried that and look at how well that's working there.

Listening to baseball player Satchel Paige on getting older

I regularly check the Focus on the Family website and today found a great piece about what Satchel Paige, the old baseball player and what he had to say about aging and getting older.  Remember, he first started pictching for the major leagues when he was in his forties and finished in his sixties.

Don't act your age, Paige emphasized.  Doris Day said: “The scariest part of middle age is the knowledge that you’ll grow out of it.”  Well, I've almost grown out of it.

Some of Paige's rules for staying young:

1. Avoid fried meats which angry up the blood.
2. If your stomach disputes you, lie down and pacify it with cool thoughts.
3. Keep the juices flowing by jangling around gently as you move.
4. Go very light on the vices, such as carrying on in society -- the social ramble ain't restful.
5. Avoid running at all times. 6. And don't look back -- something might be gaining on you.

Wikipedia has a good piece on Paige.

100 Ways to Save on Your Energy Bill

Our income is a little more fixed this year because of my early retirement, so I'm looking for ways to save money.  Skyrocketing natural gas bills which are expected as we move into late fall and winter don't make it easier.

Consumers Energy, our natural gas provider, has 100 Ways to Save on Your Energy Bill that's worth a look because it might help you save a few bucks.

For instance, did you know that for every degree you turn down the heat could save you 1-3 percent in heating costs.  Another one is closing heat register and turning off registers in unused rooms, basements and storage areas.  You can save another 5-10 percent on heating costs.

Starting my Thursday with Our Daily Bread and Discover The Word

It's a cold Thursday in this part of Michigan.  I find it's so easy to be distracted from what's important.  That's why I read and meditated on the online version of RBC's Our Daily Bread and then listened to three segments of its Discover the Word small group discussion.

Senior citizens and everybody else who might struggle with really high home heating bills this winter in Michigan should take note of rules going through the process to soften the impact and to keep the heat on.  The Detroit Free Press gives a good summary of the details.

I've seen absolutely nothing from our state lawmakers about this.  Another reason why they need to have blogs.

Dr. Jakob Nielson, a pioneer in making websites usable, takes on the 10 worst design mistakes for blogs.  It's worth a read.

The Focus on the Family website changes daily and it's worth checking out for useful information for all ages.

Today, there's a story about a study from Duke University about how prayer and Bible study can benefit your health and can even have a measurable impact on your blood pressure:

Hopefully, retirees from GM and other car companies are reading the Detroit newspapers about the future of their medical benefits.

The recent cost-cutting agreement between GM and the UAW included health benefits from retired employees.  Details haven't been announced yet.  But, today's Detroit Free Press tells about the union going to court asking that the changes be approved. Scary stuff for those on fixed incomes.

Starting my day with Dr. James McDonald and Our Daily Bread

It's so easy to lose focus in day-to-day life.  That's why I've tried to be much more disciplined with my daily quiet time where I pull out my Bible and maybe some devotional material.

MY GOAL:  I know God's real.  It's so easy to brush that reality aside.  Jesus is real too and I know that I can develop a relationship with the Triune God.  It's hard to imagine that I can have access to the creator and sustainer of everything, but I can.  I want to develop that relationship.  I particularly want to listen to God and what he's saying to me.

Now, I don't come from the side of the world where I feel God speaks to me in an audible voice . . .

Continue reading "Starting my day with Dr. James McDonald and Our Daily Bread" »

Does this make me want to vote for Bernero? 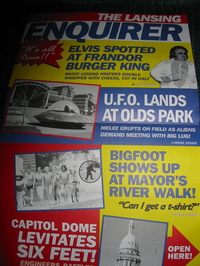 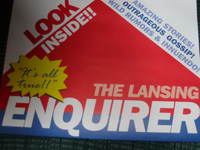 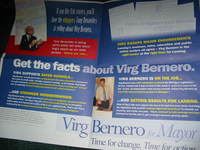 Maybe Sen. Bernero has too many bucks in his campaign treasury if he can afford pieces like this.

There's part of me that wishes I could vote for none of the above in the upcoming mayoral election in Lansing, MI.
A case in point is a mailer that I received today from Sen. Virg Bernero espousing his qualifications to run for the city's highest office.  However, you can't tell who its from until you open up this tabloid sized double sheet that has all the garishness of a supermarket checkout magazine.
Open it up and you get, a blue, red, yellow and white with these unreal headlines that make you think its from either a used car dealer or somebody who sells herbal concoctions for enemas.  The headlines are almost funny if they weren't so pathetic:

Open it up and the reason for the big headlines is to show how outrageous the incumbent's statements are about his challenger, Bernero.  Huh?  I read the paper and I get around a little bit and I've heard nothing about the mayor's race.  I've seen a few signs.  Now he's aroused my curiosity.

In this whole big mailing piece, there's no URL for his website.  I wonder if that makes a comment about how he would use that channel of communication if elected?

Tim Skubick, the host of Off The Record at the PBS station at Michigan State University and a self-described Senior Capitol Correspondent, in his column last Friday, described most voters as lazy and not willing to do the homework necessary to make good decision.
While there's a certain amount of truth, there is as Harry G. Frankfurt describes a certain amount of bullshit.  A case in point:  the campaign for mayor of  Lansing and for Lansing City Council.
With a certain amount of sometimes justified self-righteousness, Skubick, who also works for WILX TV, a local tv station, has in the past pointed to the important role that the news media plays in keep citizens informed.
My question, where is he and the rest of the local news media in reporting this campaign?  The Lansing State Journal has had a small box in the Sunday paper sharing a handful of paragraphs from each candidate where they engage in political masturbation or political attack.
There has never been a time where a State Capitol city has need leadership more than now.  Michigan is struggling big time.  And, the news media is missing-in-action, including Skubick.
How can he not share the blame for the condition of our local and state government?

Blaming drug problem on the economy

Yesterday, I read the banner story in the Lansing State Journal about how there's open drug dealing on city streets.  The reporter quoted drug treatment folks who blamed the problem on the economy.  The dope dealers and their customers are victims, they said.

This morning in Zig Ziglar's e-newsletter, there was a column from the master speaker about making decisions and how they affect your life and then he shared a quote about those who might feel that they a victims:

I've been fascinated by Martha Stewart, who she is, what she's done and how she got there.  That's why I eagerly picked up her book, The Martha Rules, when I was at Sam's Club last week.

I'm sure she's capitalizing on her increased visibility from her Apprentice Show on Wednesday nights.

Her new book, according to the jacket, is a look at how to succeed in business and is for everyone whether you're part of a start-up or work for a large company.

A cursory, surface look of the book seems to show that her business philosophy centers around being particularly sensitive and responsive to the wants and needs of customers.    I will report back as I read this short tome.

This is my first snow blower/thrower and I got it from the Sears at the Frandor Shopping Center in Lansing, MI.  I purchased it with minimal knowledge, not fully knowing whether I would need a machine with one or two stages.

Getting this machine for use in our climate was probably among the best purchases I've ever made.  It brought some redemption to heavy snow which has made me dream about moving to Florida.

The Sears website lists 12 snow blowers today, two of which are one stage and the rest being two stages.  I'm already looking for what I want in my next machine.

The possibility that this country might be facing a killer flu carried by bird--Avian flu--is surreal.  It's something straight out of a movie that might have Dustin Hoffman in it.  But, the betting money is that it could come.  The federal Center for Disease Control has good, easy-to-understand info on this threat.