A FAMILY BRAG: My son, Justin Thorp, tells about his job at the Clearspring Company, a widget maker

I've written recently about super-daughter Krista and her engagement to a pretty cool guy from North Carolina.  Many have asked about our son Justin.

Since late January he's been working for a widget-maker, Clearspring Company in McLean, Virginia, where he serves as the community manager.  It's a position that has become more common with web startup companies.

In this short video, Justin describes his new employer and what they do.  It was shot during the TechCocktail conference in Chicago.

Justin, we are proud of you.

Will the North American International Auto Show leaving Detroit be the last nail in Michigan's coffin?

As a kid in the sixties, I remember going to the North American Auto Show in Cobo Hall as a time to engage in the Michigan pride. I remember one year we went that a special "Wheels of Freedom" postage stamp was issue to commerate the show and Detroit.

Now, the show is looking at leaving Detroit where the show has been a staple for our state to show off one thing that it was really good at: making cars.

The problem seems to be about getting political leaders in the Detroit metropolitan area to agree on expanding Cobo Hall, the showcase for this event which draws millions of dollars to the city and provides positive media attention for a city that need it.

The area's political establishment can't set aside their parochial interests to get the new addition built to Cobo Hall.

While the leaders dawdle, there's a high-risk, according to Dan Howes of the Detroit News, that the show will be moved to another city or that a different host city will hold the show each year.

Who can bring these warring factions together?

Do leaders still exist with those kinds of skills to build consensus and then execute? 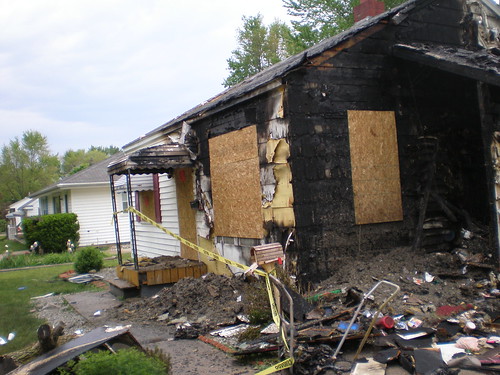 It was hard to watch the flames shoot out of our neighbor's house early this morning after we were woken at 1:30 a.m. by a police car with flashing lights in front of our bedroom window. Within a few seconds, an ambulance followed, along with five fire trucks.

My wife looked out the door and a few houses down the street and saw the shooting flames from our neighbor's living room.

These are "how you doing" neighbors who I don't really know, but who we engage in pleasantries when we walk by their house.

One neighbor who does know them said a member of the burned out household had left a laptop computer running on the couch overnight and it caught fire. Reportedly, they recently adopted two children. Today, the whole family is homeless and put in a temporary shelter by the Red Cross.

While we were watching the Lansing Fire Department, I was struck by the teamwork of the firefighters. You could tell they knew what they were doing and you could clearly see the risks they were taking.

There will be a neighborhood collection later today. Count us in.

Talk about social networking on the web to anybody over 30 and you'll many times get a response that you have to be really young to enjoy those sites.

Time magazine says Facebook and MySpace represent only about half of the hits in the social network category. This story mentions the other 4,700 plus sites which cater to niche interests.

When super-wife and I saw "Indiana Jones and the Kingdom of the Crystal Skull" this past weekend, we felt like we were visiting an old friend.

The Indy Jones movies were staples around our house on Saturdays after supper and after bath times for our kids. Even though they were predictable, they were fun to watch.

Harrison Ford plays a hero who emotes a low-key bravado and who could be your next door neighbor.

Time magazine movie reviewer Richard Corliss seems to really capture the film and its significance for our national psyche:

"There are scenes in the new movie that seem like stretching exercises at a retirement home . . ."

"Crystal Skull is intended, and works effectively, as instant nostalgia-a class reunion of the old gang who in the 80s reinvigorated the classice action film with such expertise and brio."

"Super-daughter" brought our "son-in-law elect" home for a visit last weekend.  We had spent time with him a couple times before in different states.

There's a special synergy between the two of them, our daughter who grew up in Lansing and her intended who is from North Carolina and Bosnia where the two  of them met.

This weekend was a good time.  We had plenty of time to sit around the kitchen table.  We drank coffee, a Honey Brown beer, checked out highspots in the area during wedding dress shopping and we went to church together.

He's a classy guy with the right values and who really loves our daughter. 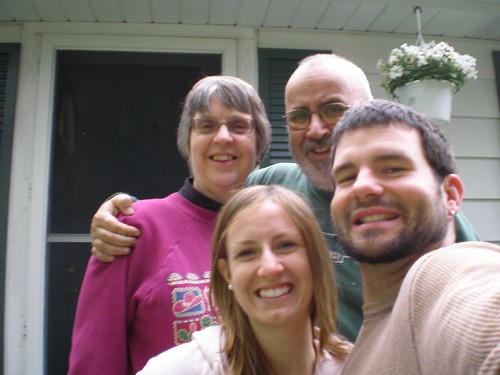 Links from May 20, 2008: Sharing my online reading from the heart of Michigan

Will smoking ban be another slap in the face for Michigan economy?

While Michigan's upcoming smoking ban might be good for the health of state citizens, it won't be healthy for the state's economy?

The state's very stressed treasury depends on the high per pack tax revenue and moves to limit smoking will undoubtedly affect how much money state government has to spend.

The fact that the ban has gotten this far in the Michigan Legislature is an encouragement for those concerned that its term-limited members couldn't resolve controversial issues.  With so many different interest groups involved, especially casinos, restaurants and bars, it would be instructive to hear the details.

The one hope for the auto industry here in Lansing (MI) at the General Motors plant making the new crossover utility vehicles is tarnished with the current strike over a local contract.

If you drive by the plant which makes the hottest-selling vehicles that GM has and you see a picket line where workers are waving their "On Strike" signs with confident smiles.  But, a story in today's Lansing State Journal puts the situation in another reality.

UAW strikers get $200 per week in strike pay.  What does that mean for day-to-day living?

So, you have this hot-selling vehicle which is not being made because of a strike and if it was being made a smaller and smaller number of people would be able to afford to fill it up at the gas pump.

In Michigan, if ballot question passes could I smoke a joint for my glaucoma?

When I read this story in today's Detroit News, I was reminded that I and the rest of Michigan voters will decide whether marijuana can be legalized for medical reasons.  And I would qualify.

I have had chronic open-angle glaucoma for several years and supposedly it would lower the pressure inside my eyes.

The story says that polls indicate that the proposition would pass pretty overwhelmingly.

My gut reaction is that I'm against it.  Even if it's legalized in Michigan, it's against federal law. It also seems like a first step to legalize grass for everybody.

By the way, does anybody know how much it lowers pressure in the eye?

It's official that I'm father of a bride to-be

Gladys and I were just walking out of Barnes and Noble at the Lansing Mall yesterday when Krista called on my cell.  She was really excited.  Her boy-friend, Adam Jones, asked her to marry him.  Wow!  As customers were walking in and out of the store, we both did the big smile. 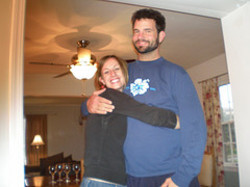 the two of them complement each other.  He really loves my daughter, my super-pumpkin, my little girl who has become a young woman of note. Wedding will probably be in the fall.

I still remember bringing her home from the hospital.  Then there were all those newborn nights where she woke up and we'd walk the floor together, with one of my hands on her and a Time magazine in the other which I would read to her.

I'm really proud of her and of the guy she picked to spend her life with. Welcome to the family, Adam.  Check out his blog.

Hillary Clinton says she's like Eight Belles, the Kentucky Derby horse who had to be put to sleep

Hopefully, Hillary Clinton can laugh at herself.

According to Time magazine's daily political report called The Page, she picked Eight Belles to win the Kentucky Derby and she compared herself to the horse.

The outcome:  Eight Belles collapsed immediately after crossing the finish line, and was euthanized shortly thereafter, according to The Page.

Time's senior political reporter Mark Halperin's daily minute video about the presidential campaign is worth checking out.  He has three things to watch out for everyday.  It's short and sweet and opinion-free.

How many cities in Michigan are like Pontiac and showing signs of a death rattle?

Many cities in Michigan are suffering from not having enough money to pay their bills.  This morning the plight of the city of Pontiac is featured in the Detroit Free Press.  Look at some of the hard, cold facts mentioned in the story:

The city of Lansing is struggling with its budget.  Pontiac's situation brings home the importance of what the city leaders are doing.

They need to be successful.  The alternatives are not very inviting.

My friend, Adam Jones, is running in the Indy 500 mini-marathon right now

It's almost 7:45 a.m. and I'm sitting on the couch here in mid-Michigan, while my friend, Adam Jones, is running a mini-marathon in Indianapolis.  He's my daughter's boyfriend and he's a person who I have gotten to know better during the past few months. In January, I shared my father-of-the-daughter's opinion of him and my esteem for him and his relationship with my daughter has only grown. He's a blogger too and he's been blogging about the race and about his life in Indy.

There's part of me that wonders if Chrysler's new customer service efforts are just corporate eyewash to make the public believe that it wants to listen.  But, if they're really serious, the consequences of having the top executives at the car company call the people who buy their cars could be truly amazing.

A Detroit Free Press story today says that the company's top 300 executives and directors will be calling one customer a day to check their satisfaction with the company car they purchased. The goal, according to a company spokesperson, is to bring the customers closer to the company.

Just think if Michigan carried this attitude throughout its various layers of life.  In Lansing, what would happen if each city council member called one constituent per day and check on that citizen's concerns about the city.

The same mindset could apply for state lawmakers. Chrysler calls their program "Customer First."  Move that attitude over to any area of endeavor in the state, from schools to General Motors, and the implications could be colossal.