Fourth of July links I discovered while visiting our son in Washington D.C.

I admit that I've taken the Fourth of July for granted.  Lots of people paid with their lives and their livelihood to be free from England.  Today, we are visiting our son, Justin, in Washington, D.C. and can see the dome of the U.S. Capitol from his apartment.  Here are some links appropriate to the holiday:

I thought what better way to show how a cell tower stands out in a neighborhood, then shooting a video with my new Flip Mino video camera.

T-Mobile wants to build a 120-foot cell tower to the north of my home just down the street.  Well, to show the height, my wife--Gladys--and I, went down the block to the neartest cross street and drove east. We drove down Herrick Street to its end in our southwest side neighborhood of Lansing (MI) towards Pleasant Grove where there's a cell tower.

It's next to a church and a school. Check it out.  What's your guess about it's height?

For more information:  Check my neighborhood blog--Southwest Lansing and My Neighborhood--where I cross-posted this video.

Link to National Organization For Marriage, Protecting Marriage and the Faith Communities That Support It

Interesting website for the protection of marriage:  The National Organization for Marriage

If gay marriage becomes law of the land, then massive persecution of the Christian church will follow, according to Chuck Colson

Could Chuck Colson be right about gay marriage and what will happen to the church if it becomes the law of the land?

In a Breakpoint commentary, Colson says:

As my friend Jennifer Roback Morse notes in the National Catholic Register, “Legalizing same-sex ‘marriage’ is not a stand-alone policy . . . Once governments assert that same-sex unions are the equivalent of marriage, those governments must defend and enforce a whole host of other social changes.”

Then he cites examples of how this persecution has started against various religious organizations in this country and in Canada.

I have been trying to understand Barack Obama's religious views.  He describes himself as a Christian and a follower of Jesus Christ and he has commented about the Bible and the role that it should play in setting public policy.

Here are some links from Christianity Today:


I haven't read these yet, but I plan to.  I realize that these links come from a publication with a conservative Christian perspective.  Anybody got links from other perspectives to help fill out the picture?

Leave a comment on this post if you understand the eight-pages of the stealth petition drive being circulated by the Michigan Democratic Party and its group Reform Michigan Government Now.

I don't like what I'm reading about how it would change state government and how it would end up taking more and more of our tax money while totally redoing the face of all branches of government.

Join me in taking some time to learn about it:

It requires some effort to read through the proposed changes.  But, the consequences are damaging if they pass.  It's worth the effort.

My son, Justin, is a graduate of RIT and while there he got involved in a group that was particularly meaningful to him, Campus Crusade for Christ.  Friendships he made through that group are still very meaningful to him, more than two years after graduation.

That's where he met Debbie Crane, who also is a RIT graduate, who will be joining the group's ministry in the Eastern European country of Serbia.

Debbie saw my name on my son's Facebook page and sent me a note saying hi.  I clicked on her link and found details about her year long commitment to Serbia.  Justin told me of his strong belief in her and her efforts and said she's deserving of my financial support.

So I clicked on her Campus Crusade page and made a small contribution.  I hope to make more and I hope to hear more about her ministry.  Her mission is exciting.  I invite others to join me in supporting her effort. 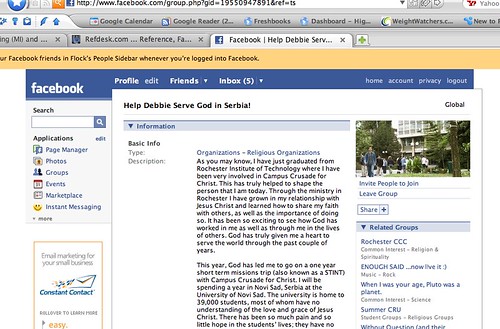 How important is one vote, your vote?

This fall's general election will be important to this country.  How important is that you vote?  What effect can one vote have on the outcome?

In a letter to his supporters, Dr. David Jeremiah lists six times where one vote made a difference in the course of human events:


Are there any other occasions where one vote has made the difference?

Detroit, a big part of the heart of Michigan, is crashing and burning because of Democratic party dominance

Put whatever public relations spin you want on it, but the city of Detroit is in a death dive that it doesn't seem capable of pulling out of.

Check the daily headlines where there are stories of municipal corruption starting with the mayor, extending to the Detroit City Council along with gross mismanagement at the Detroit Public Schools.

Why is this happening in a city that had been the heart of Michigan.  When I was a youngster growing up in Bay City, my mom's church group would charter a bus to spend a day in Detroit shopping at Hudsons and eating at a nice restaurant.

Nick at Right Michigan, in a post today, and who is from Grand Rapids shares his Detroit pride.  He also pegs the city's problems to a lack of political accountability.  Regardless of what its political leaders do to diminish life in the city, voters keep putting them back in office and they are always from the Democratic party.

This fealty to the Democratic party has been abused by city leaders who see it as a blank check to do whatever they want.

Can anybody point to cities which have been in a free fall like Detroit that have been able to pull back on the stick and get back on an even keel?  What did they do to get there?