Just got this Twitter from my son at Detroit Metro Airport:

Alarms are going off at terminal a of dtw. Pa system says to go to the fire exit

(UPDATE:  HE TWITTERED THAT THE ALARM HAS STOPPED.  HE GOT THIS PHOTO WITH HIS iPHONE-- 8:54 pm)

Will the Detroit Lions hire Bill Parcells as their new coach?

This is what the Detroit Free Press says about the hapless Detroit Lions hiring Bill Parcells.

Our local newspaper--the Lansing (MI) State Journal--seems to be in a death spiral. We are the State Capital city of Michigan and this Gannett newspaper kinda sorta covers the news these days.

Is this announcement in today's edition an indicator of it continued march towards extinction:

Sports will begin on the back page of the Local/State section rather than as a stand-along section.

And then there's a description of how they will cover sports. Keep in mind that Michigan State University is just down the road with Big Ten basketball and football.

How many people will stop buying the paper because of the reduced sports coverage?

When will our paper become little more than a shopper filled with ads and canned news releases?

Baby Boomer Report: Looking back and ahead at turning sixty and the changes in my life

I'm sixty-two years old which means that I was born in 1946, the first group of baby boomers, the population bubble that came right after the end of World War II.

As the New Year stares me in the face, I want to start looking back to set both short and long range goals. Because of my age, I know that I need to be more intentional about living and what I want to do in life. It's easy for me to let life happen, to be reactive, rather than proactive.

One area that concerns me is health. I'm okay in that area right now, but I know that I've taken it for granted. Food is the issue, both physical and spiritual.

I do know that my future will be determined by what I eat and digest in both areas today.

I need to sort this out more in my mind. I'll probably use this blog to help me in that effort. More to come. I've need to get ready for church.

We saw Marley & Me on Christmas Day

Marley & Me surprised all of us.  My wife, son and I all agreed that this is a movie worth-seeing. 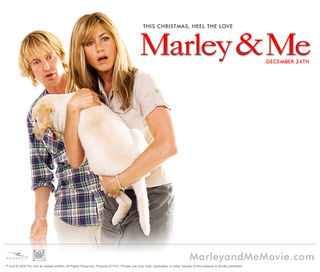 It's a good story that started with a real life book and was not ruined by those who translate such things into a movie.

It's a story with some depth and a variety of layers with a beautiful golden labrador retriever as the centerpiece.

Owen Wilson's character is a young newspaper reporter covering the crumbs that fall off the news desk at a large newspaper in Florida who's pushed into becoming a columnist.  His wife played by Jennifer Anniston is a reporter who's achieved a higher level of success.

They get this big dog, Marley, using their relationship with the dog to guide them through the challenges of a marriage, a profession and family life.

If you need your heart-warmed or just entertain, see it.

A Flickr slide show of our 2008 Thorp family Christmas

Here's a partial photo record of our Christmas 2008 as seen in this Flickr slide show.  There's more to tell in upcoming posts about what we did.

We drank Michigan wine at our household this Christmas

We just finished our Christmas dinner and it was outstanding.  "Super-wife" raises the bar every year.  But as Michigan tries to grab a new economic identity for 2009, check the wine bottle on our table from Leelanau Wine Cellars.

Even though Gary Vaynerchuk apparently refuses to acknowledge Michigan wine, it's my contention that our state can compete with California or New York wine any day of the week.

I encourage you to try our wine.  You may not want to or be able to afford a General Motors car, but step out with a bottle of our wine.

Tuesday a.m. video of Michigan's I-69 between Lansing and Flint

The "Justin" has landed and this time it was at Flint (MI) Bishop Airport about 45 miles east of us down I-69.  It's snowy, windy and really cold.  Roads in our part of the state have been a terror at times during the past week.

Check this video and you see that the freeway was dry with blowing snow.  The ride took us about 50 minutes.

Our son had just landed when we got there.  He got his bag and we were off again.

Could spending $20 per week on Michigan food products make a difference?

I just saw this video on the blog of Missy Caulk, an Ann Arbor area Realtor. She shares this video about how Michiganders can pump some big bucks into the state's economy by buying food stuffs grown here. It's from marketer Charlie Wollmark. Could it really pump $3.7 billion into the state economy? In her blog post, Missy says:

If Michiganders spent just $20.00 a week on buying local Michigan made products we could circulate 3.7 billion into our economy.


Michigan $3.7 Billion Bailout is Approved! from Charlie Wollborg on Vimeo.

It's a butt ugly day in mid-Michigan with high winds, extreme cold and snow

Yeah, the sun's out, but outside we have extreme cold, high wind and snow.  I went out to snow blow the curb cut in the driveway where the snow plow passed.  I took this Flip video and decided to wait til later today or tomorrow.

The Thorp Family Christmas Letter for 2008 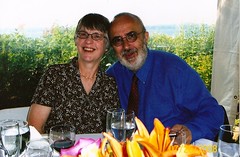 She grabbed my arm and looked at me and I almost lost it.

I was walking around the sanctuary of the church when the pastor said they needed me to rehearse walking Krista down the aisle.  She grabbed my arm at the end of the aisle and I looked at her and that's when my emotions when into overload.  The tears were just behind my eyelids, a new experience for me.  I couldn't talk.

Cleaning my driveway and sidewalks

Cleaning my driveway and sidewalks
Originally uploaded by west846

There was at least a half a foot of snow on my driveway and sidewalks this morning when I used my Sears snowblower for the second time in two days.

Schools are closed and there isn't much traffic through our subdivision.

I feel sorry for Michigan lawmakers driving home from Lansing today as the snow is supposed to keep coming down through the evening.

As I get ready to clear several inches of snow from our driveway and sidewalk, here' a good suggestion from the Detroit Free Press on handling an icy windshield:

That way they won't be in contact with the glass and they won't freeze to the windshield.  Wiper blades may be ice covered, but you'll have an easier time breaking the ice off, according to the story.

Great link: Each day check out front pages of newspapers around the country and world

I remember vividly spending hours in the reading room at the old Michigan State University School of Journalism building reading hard copies of front pages and being totally fascinated.

This teacher from Southfield (MI) and featured in today's Detroit Free Press sets an example for all of us.  The story makes my day.

She's been doing it since August and she's touching lives.

I wonder if her kind of effort is being duplicated here.

I am a conservative in the free market, Barry Goldwater sense of the word.  Government does very few things well and what it does get involved in it usually does a poor job.

On a philosophical basis, I agree with an email I got yesterday from David Keene, the executive director of the American Conservative Union.  The best method for fixing the auto industry is to let the free market sort out the issues with the auto industry.

They point to the fact that auto companies are producing cars that most U.S. buyers don't want.  The email says:

The facts are U.S. automakers produce less than 50% of the vehicles Americans now buy.  Statistics from the Center of Automotive Research document the density of vehicle assembly line manufacturing has shifted as foreign manufactures assemble more and more vehicles right here in the U.S.

Now take that "Let them eat cake attitude" to Michigan and you're not going to get many takers.  Every one of us in our state is dependent on the auto industry more than any other state.  We all have friends and relatives who work in the business.

There's real fear in a middle class that has depended on the auto industry for their livelihood.  It's not their fault that auto industry leadership has failed.

Conservatives need more compassion and they need to step in with ideas that will attract persons whose lives will be dramatically changed forever.

Here's what Jesus means to Boomer In The Pew

I'm glad I asked my friend Dave Porter of Scottzdale, AZ, what Jesus means to him.  I popped the question with my Flip video camera on during a visit we had over coffee today at Shulers Bookstore in Eastwood Town Center in Lansing, MI.

Dave has become a good friend.  It's a relationship that started because of blogging and was maintained through blogs along with Twitter and Facebook punctuated by today's face to face meeting.  I helped him a couple of years ago start his first blog for a thriving mortgage business.

When he sold this business, he retired and moved west where he and his wife retired.

This transition touched off a very serious journey for him where his heart has undergone a serious transformation.  He writes about that in his blog, Boomer In The Pew.  In this short video, he talks about it.  Take a minute and let Dave share where he's been and where he's going. 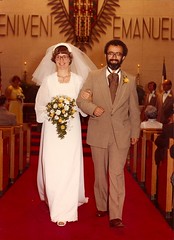 When I bought my Mac Book Air at the Apple Store in the Woodland Mall in Grand Rapids last May, I got a free HP Photosmart 4280, a combo, printer, copier and scanner.

I finally got the software on my computer and have been scanning old pictures. We have several boxes of old prints going back 30 years and we have pictures that we both inherited from our parents.

I've been on a scanning holiday. I love knowing that these pictures are protected from loss and any demons that might take them from us.

This picture was from our wedding day and reminds me how thankful I need to be for how much God has blessed me. I love this photo. It shows the start of the biggest and most positive adventure of my life.

My wife is a beauty and still has that same wonderful smile that matches her positive attitude.

Scanning old photos is a great way to spend a cold and gray Sunday afternoon in Michigan.

What do the cashiers say when you pay for your purchase at big chain retailers in your area?  Do they say the less offensive Happy Holidays or Merry Christmas?  This news story says more big chains are letting employees recognize that it's Christmas in their greetings:

Give your member of the U.S. Congress this competency test

Members of Congress should have to take a competency test.  Everybody agree?

Look at the decisions they have to make that affect everyone of us and will decide what our future looks like for generations.  Most of those decisions involve money.

David Porter, a retired mortgage broker who is now mentoring other members of his profession through the rigors of running a business in this troubled economy provides a simple test in his Mortgage Broker Coaching, LLC blog.

Here's his suggestions for deciding whether a person is ready to serve in either the U.S. House or U.S. Senate:

Then, finally, agree to run our nation the same way.

If that test was given to each member of Congress, how many would pass?