Does this sound fair to you?

A woman could not pay a hundred dollar bill her young son racked up for juvenile detention in Michigan's Delta County in the Upper Peninsula so the judge threw her in jail for 30 days, according to George Bullard of the Detroit News.

The mom had a part-time job where she received a check that would have barely covered her son's bill from the county. Instead, they took her check to pay for her month long jail stay.

Is it time to stop making Michigan prisoners pay for their jail stay?

Sounds like it's starting to be used as a revenue enhancer and not a tool to promote justice.

How much is Michigan being hurt because of a skeleton State Capitol press corps?

If you live in Michigan or any other state for that matter, I offer a challenge. Try to follow the happenings of the State Legislature and the rest of state government. Look for news about your state legislators and about what issues are being debated and voted on.

Where do you go?

The press corps at the Michigan State Capitol is hardly big enough to be a shadow of its former self. When I was the Press Room Manager at the State Capitol from the mid-70s to the late 90s, the Press Corps usually had 45 or more active members.

How many does it have now? Ten? Fifteen? There can't be many more and more than likely there are less.

Keep in mind, state capitol reporters are the eyes and the ears of the people of Michigan. They shine the light of public attention on our government apparatus and those involved in it.

It's just not happening anymore. What does this mean? State voters don't have any place to get steady ongoing information about the who, what, when, where, how, why and so what of their state government in Lansing.

We are in the dark and at the mercy of politicians who try to bend information to their benefit.

The National Conference of State Legislators says state capitol press corps have been downsized more than 30 percent since 2003.

That hurts us all, especially during at time when state government plays such an important role in our everyday lives.

The state of Michigan produces about one-third of all blueberries in the United States, but is being threatened by imported blueberries from South America.

This Detroit News story tells about how blueberry prices will plummet this year. Will the drop in prices affect supply?

Is it time for a tariff on the foreign imports?

Can you grow a green lawn in Michigan without phosphorous?

I remember growing up by the Saginaw Bay (MI) and seeing all the muck and the algae in the water, especially by the shoreline. It was an uninviting witches brew that was not inviting.

The answer or, at least, part of the answer according to Bay County government is to ban the use of phosphorous in fertilizers for residential lawns.

This story in the Bay City Times chronicles the reaction of lawn care companies in the area and stores selling phosphorous free fertilizer.

Will this clear the bay of the muck and algae?

Is this a good local law? Should it become a state law?

I'm glad that we worshipped this morning--Palm Sunday--at Grace Lutheran Church in Destin, FL. Pastor Paul Kummer led a dynamic service that would be alien to most members of a Lutheran Church Missouri Synod (LCMS) congregation.

People seemed happy to be in church and they showed it in a variety of ways that's not part of the experiential base of most Lutherans. There were hints that Grace Church is really touching this part of the panhandle of the state. But, a blog would help people see a fuller picture. I'll share why I feel that in a minute. 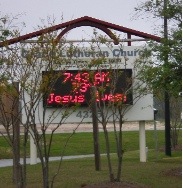 Some of the things from this morning's service: 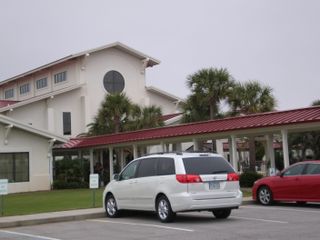 I'm really intrigued by the ministry there and I'm interested in learning more.  There are obvious questions that come to my mind that might help extend the reach of this Florida church reach me in the north.  I'm sure it's reaching people far outside the area, but what would happen if Pastor Kummer had a blog where he had frequent, short, transparent posts about him and his life, the church, its people and happenings and how it was touching people for Jesus Christ.

I will look again at the traditional website, but there's only so much that can be included to make it current and relevant.

Would a blog help?  It could.  But so many pastors don't know how to use this powerful tool to build their ministry.

For Pastor Paul, it might be worth a try.

Are you curious about the details of that first Palm Sunday?

In less than a half hour, we leave to attend the worship service at Grace Lutheran Churchin Destin, Florida where they attending during their snowbird stay here.

It's Palm Sunday, a special day in the church year. I'm trying to get my heart and my attitude ready for a time of worshipping God. But . . . I've been to Palm Sunday, Holy Week and Easter Services all my life and they seem to blend together in their blahness.

I'm not putting that on anybody other than myself. Today, I want to feel the presence of God at the service.

Thinking back to that first Palm Sunday where Jesus entered Jerusalem, I wonder how many people saw him make the entrance into the city. A thousand? Several thousand?

Did the people shout and scream or were they just curious? How many knew who we really was?

How much buzz did his entrance into the city create? Was there a lot of word of mouth?

If that happened today, do you think it would have been a topic in the blogosphere? Would CNN have been there live? Who from CNN would have covered, one of their big gun reporters or a lesser light?

God bless your Palm Sunday. It's an important day to observe. It's leading to Easter in a week.

Do you feel drug companies should be given a free pass from lawsuits in Michigan?

Read this story about how drug companies are given a free pass from lawsuits in Michigan and then tell me whether you think that's fair or not. And then call up your state legislators and ask them whether it's fair.

Check their knowledge of the issue and whether they are trying to answer with political mumbo jumbo that's fueled by an attitude that's based on fact.

This story presents very real life situations in Michigan where people get hurt by drug company mistakes and victims of those mistakes have no recourse to file a lawsuit.

Michigan legislators created a shield from those lawsuits more than 10 years ago with the hope of luring drug manufacturers into the state. It hasn't worked because they've been moving out.

State legislators are trying to change this.

Voters might want to weigh in on this one, particularly babyboomers who are approaching the age where health care issues become more relevant.

Here's what I'm reading on the web while sitting at my aunt and uncles table in the little apartment attached to their house in Destin, Florida before I shower and get ready for church:

Our GPS took us right to the front door of my aunt and uncle in Destin, FL

It's almost bedtime here in Destin, FL where super-wife and I are taking a few days to visit and stay with my aunt and uncle and to just unwind a bit and to mentally try on the title of snowbird.

I can't say that we will do the babyboomer thing and spend our winters in Florida.  I think I'd miss my snowblower too much, but I can say that I'm struck by a number of items.  First,  I've got so much to be thankful for.  God has really blessed me which makes me excited about celebrating this Easter.  Here are some trip notes:
Here are some video menmentos before it broke starting with this morning:

In downtown Lansing (MI), two downtown businesses, a card shop and a dollar stores, were sent a bill for $50 going out of business along with a demand for some serious paperwork for what they were selling.

I write about it in "The Lansing Blog."

City Hall says it's enforcing state law. Is it an insult or a protection?

In Holland (MI), the Tulip Time festival gives the boot to Right To Life float

Holland, Michigan on the state's westside and in the heart of it's Bible belt is the last place that you would expect a Right To Life float to get booted from a parade.

But that's what happened when officials of the city's annual Tulip Time festival said it wouldn't allow for the first time in three decades a local Right to Life group to enter enter a float in its parade, according to the Grand Rapids Press.

Reason given was that the festival's new nonprofit status didn't allow any organizations trying to influence a legislative agenda. However, the local Republican group has been given the green light to have a float.