The state of Michigan is in trouble and everybody knows it, particularly the Democrats and Republicans.  Our leaders on both sides of the partisan divide seem more interested in scoring points than in advancing our state.

Detroit News business columnist Daniel Howes outlines the problem in a very clear, concise and concrete way in his column today.  Our state is being led by a governor and a Senate leader who are obsessed with the politics of division.

Meanwhile, the state is in a death spiral where the voters need to take control.

Here's what I'll say tomorrow on Tim Skubick's "Off The Record"

Tim Skubick, the host of the long-running Off The Record show on Michigan's Public Broadcasting Stations has invited me to be a guest reporter this week on his panel that discusses happenings at the State Capitol.

I've been a guest reporter on his show more than thirty years ago and I was a real reporter than working for a Michigan newspaper chain and covering the State Capitol.  A lot has changed.  Now I'm a blogger who has clear opinions, but still has a strong desire to help state residents understand their state government.

I come from the conservative Republican side of the world believing that there are only a few things government does well and it either does a mediocre or poor job with the rest.  So, I believe in personal responsibility and personal freedom as the best template for dealing with issues.

But, right now, Michigan is at a fork in the road and its leaders cannot take the Yogi Berra advice where he says when you get to such a point "take it."  Our leaders have led us to a point where there's the perception that we are not able to govern.

There's hyper-partisanship where it seems that Democratic partisans feel that the road to hell is paved with Republicans and vice-versa.  Listen to some Democrats and you get the feeling that they feel that the world would be better served if there was a genocide with all conservatives being offered on the altar to big government.

And there are Republicans who feel that Democrats are as evil as any terrorist from the Middle East.  They seem to believe that their counterparts on the other side need to be fought with the same ferocity that's taken to fight the Taliban.

If Skubick asks me how I see this playing out and what I see as an answer, I'll share that I think:

So, what does all this mean?

Michigan is not going to be a place for the faint hearted and the impatient.  It will take sheer a strength of character and raw courage to thrive in this kind of atmosphere.

The question in my mind:  Is this condition the fault of the leaders or does it just reflect where voters are at right now?  They are conflicted about what they want and their leaders are just reflecting that condition.

I'll report back about Off The Record tomorrow after the taping.

Is Joe Stowell right about Jesus showing up in our lives?

I'm sitting on our living room couch watching the sun come up here in mid-Michigan and wondering about the devotion in today's Our Daily Bread from Radio Bible Class written by Joe Stowell.

I keep asking myself, how does this apply to me, right here in the heart of the Great Lakes State.  The story is from John 21: 1-14 about Jesus showing up on the shore of the Sea of Tiberias while his disciples were fishing.  He had died a brutal death on the cross and his followers felt that the hope had been sucked out of them.

Then he shows up on the shore and yells to his disciples about where to catch fish and they fill their boat from their full nets.

As economic uncertainty continues, political turmoil increases, our country gets mired down in yet another war, people can't find jobs and everything else, there's need for a Messiah.  We have one and he's still here.

Like the disciples, we may want to return to our own agendas when we get discouraged in our walk with Jesus. But then Jesus shows up again on the shore of our lives to extend forgiveness and to draw us back to those moments when He first called us.

I will be looking for Him today as we start another day.  That story is a promise.  Right?  Has anybody else seen Him "on the shores" of their life today?  Is this story from the Bible still relevant?

Why do I have a tattoo on my arm that says, "SO WHAT?"

What do you do when you're in LasVegas with your son at a Promise Keepers rally?  You get a tattoo, right?

Still feeling a spiritual high from the PK event at the University of Nevada-Las Vegas, we were walking the famous strip with casinos, restaurants, all kinds of stores and wall-to-wall people.  When we passed a tattoo shop, we both looked at each other with a double-dog dare you kind of smile.

My choice for a tattoo on my arm was two words, "SO WHAT?"

These two words have had a special meaning for me for a long time.  Back in the sixties when I was at the Michigan State University School of Journalism, I was trained to write hard news stories.  Always put the who, what, when, where, how and why in the lead.  And don't forget the "SO WHAT?"  That always stuck with me.

Now more than 40 years after I graduated from MSU, I still ask that question.  And so does my son, Justin, who sat around the dinner table trying to dissect sermons and speeches and articles with the first question being "SO WHAT?"  He's taken it a step farther and examined what he does for a living by asking himself the question.

What about the tattoo?  When I saw the needles and I learned that they didn't wash off, I passed.  But the question is burned in my head.

How about Justin?  What tattoo did he get?  You'll have to ask him?

The scales this morning show that I continue to lose weight and my baby-boomer belly using the Weight Watchers Online program.  Since the start of the last week of July I have lost 16.2 pounds.

When I entered my weight, the screen encouraged me, but warned that I had lost more than the recommended two pounds a week.

This past week, however, super-wife and I ate well.  We even had a glass of wine while watching television, a spice wine from Leelanau Cellars.  We just recorded it along with a point value.  I haven't felt terribly hungry.  Most of the time I feel satisfied with what I eat.

Why and I sharing this?  A couple of reasons:  first I need to keep myself accountable and second I know there are plenty of baby-boomers out there who have moved the risk factor needle beyond what it should be.

I'm proof it can be done.  I know the challenge lies ahead as I rewire my thinking to make this a lifestyle change.

Here's a link to one of the main healthcare bills in the U.S. Congress, HR 3200

I just found this link to HR 3200, the main healthcare bill in the U.S. House of Representatives.  The link goes to the whole bill.  It's on the website of U.S. Rep. John Culberson of Texas.  Anybody have links to the other legislation for healthcare reform in the Congress?

Would it help if Michigan churches started praying for the state legislature and legislators?

The state of Michigan is in trouble.  Everybody knows that our leaders in the state legislature have dug a hole that's getting deeper and deeper and harder to escape.

I wrote earlier that there was no apparent answer and that the state faces more trouble because of its seeming inability to govern itself.

I'm wrong.  There's an answer outlined in this post from Pastor David Maier, the new president of the Michigan District of the Lutheran Church-Missouri Synod.  In his blog, Fighting Forward, he calls on every church in our state to pray for legislators and he then outlines how people can pray for them.

The answers and the roadmap out of this morass that we've created for ourselves can only come from one place and we're not talking about a political party or an earthly leader.  It will come from God and his power, his mercy and his compassion. 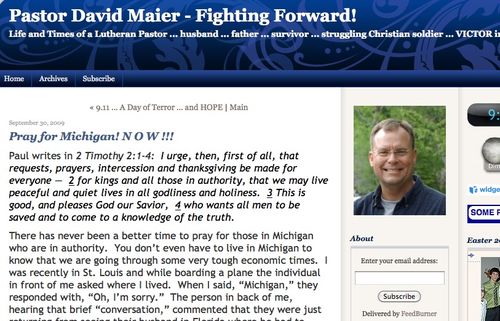 I hope my kids watch this video in the Detroit News about the closing of the Pontiac General Assembly Plant where thousands and thousands of vehicles were assembled.  In the video, workers and their sons and daughters describe what went on there and how it affected their families.

The video and the first person column describes a project being discussed by the Library of Congress to do an oral history of Michigan's auto workers and what they remember.

Everybody in Michigan has had somebody whose life and livelihood centered around an auto plant.

It was part of the life here and it permeated just about every region of the state.

I'm anxious to listen to auto workers tell their stories.

It's part of our identity from being born and raised in Michigan.

What's the answer for Michigan?

A friend called last night about 10:30 to chat about the Michigan Legislature's efforts to pass a budget before the midnight deadline.  As a lobbyist, he was wringing his hands about our state's inability to agree on important issues like spending.

He asked:  "What would you do to get this back on track" and prevent it from happening again.

I don't see an answer.  There's no leader on the horizon who can bring polarized sides together.  There's no willingness in the state legislature to compromise.

The problem will continue and the state will keep on devolving into being a second-rate place to live and do business.  How sad.

Anybody see an answer to this mess?