How "contented" and "satisfied" am I with my life right now?

For the past six weeks, our church--Ada Bible Church--has been going through a series of sermons on living a contented and satisfied life during a time when we have a consumer culture.  It has produced some significant conversation between super-wife and I.

We are not rich, but we have a significant amount of stuff.  It's almost embarrasing to catalog our earthly belongings and then think that we need to have more.

But we've been reminded that the more you have the easier it is to ignore God and what he has done for us.  It can distance me from God and as I get older I know that I want no distance in that relationship.

I need to spend more time with this sermon series.  Each part is live-streamed and then archived.  Each day we get a devotion emailed to us based on the sermon.  Here are the links to each sermon. I invite you to check them out.

Have you ever tried guessing the gender of a grandchild? 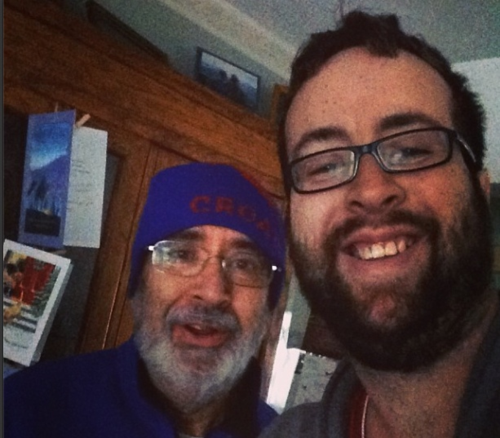 I wonder if my pre-born grandson will grow a beard.

I usually don't get involved in guessing the gender of somebody's baby, but I woke up this morning and felt that my son and daughter-in-law's baby is going to be a boy.  Our third grandchild is due in July.

My son Justin would be happy with either a boy or a girl, but with my dream last night and my waking up with it clearly on my mind left me with the clear impression that it's going to be a boy?  Why do I say that, you ask?

From my dream, it's simple.  I harken back to the beginning of my relationship with him when I cut his umbilical cord.  From that point on the bond between the two of us grew and grew.

The male bonding thing started early and it didn't stop.  Of course, he spent lots of time with my wife.  They bonded too.  But there was always something special between him and me.  That grew as he got older.

I was never a big sportsman, but we went to all kinds of games.  I took him to work.  We talked and then we talked some more.  Then we both discovered computers and the web early on.  We sat side by side in my old study while we went through an all-text version of the web.  We were both totally fascinated by where we landed with each menu choice.

He was also interested in my work as both a reporter and as a political staffer.  And he went with me to every kind of event and meeting imaginable and then we would talk about it.

Before he left grade school, we were both introduced to cappuccino and coffee shops.  We started to do the family grocery shopping every week which was always preceded by getting a cappuccino.  It was a time that was filled with conversation.  I could go on and on about all the other things we did together, including the nine or ten Promise Keeper events we went to.

That relationship has been through  a few transitions.  He has become a full-fledged adult with a wife and a pre-born kid.  We still talk a lot even though he's on the other side of the country.  I was the best man at his wedding, a supreme honor.

But, I think it reflects the fact that we are best friends.  I value his advice and opinions and he does the same with mine.  I really won when it comes to having a son.  Actually, I really won bigtime in having a daughter too.  I feel really close to her too.  She's major league special.

So, I think Justin's going to have a son.  Let me modify that.  I hope he can have the same experience I had in having that special relationship between a father and son.  But, if he has a daughter that relationship is just as special.

I thank God for the privilege of being a Dad.  It's a role that's in the top rank of my resume.  Matt Redmond, the Christian singer, has a song about having 10,000 Reason to praise God.  My kids and my wife would take up more than half of those.

I don't really know which gender the new Baby Thorp will be.  I just fervently hope and pray that my son and his wife experience the same love and rich experiences that come from having children.

Thank-you God for my wife and my kids. 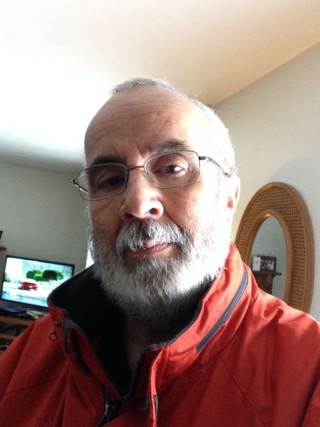 Two words--brain tumor--felt like a taser when I heard them.

I had heard stories about friends who had friends with brain tumors.  Some required people to feed them, while others could not see or talk in a way that made sense.

That's why when I heard a year-ago that I had a brain tumor, my heart skipped a few beats and my thoughts became focused like a laser.  It was all part of a series of experiences with my right eye where they lens in my right eye kept falling off its perch and it would be put back-up.  After the recovery, my vision was worse, instead of better.

I got a MRI which showed a 6 mm. meningioma on the back of the right side of the brain.  After that I went to a whole series of opthalmologists who had sub-specialties, including neurology.  The conclusion was that it was benign.  The next point of concern was whether it would grow.

Last Wednesday, I had a MRI and I got the results back this morning.  The medical assistant for my primary care provider said that the test found that it hadn't grown.  That's one item I can take off the worry list.

Spending time with my family around the dinner table today

We spent an hour today around the dinner table with four members of our family.  Instead of sitting in chairs, they were on our computer where we had a Face Time visit with our Apple computers.  Does this work when face-to-face in the skin visits are not possible?

Is this a viable alternative for baby-boomer grandparents like ourselves who have family living in another state or country?  Can you fill that part of your heart where you really want to see your children and grandchildren?

I would recommend it for grandparents with kids who live in other states or countries.  It's actually pretty easy technically.

Here's some pictures from our visit today with our daughter, son-in-law and grandkids this morning. 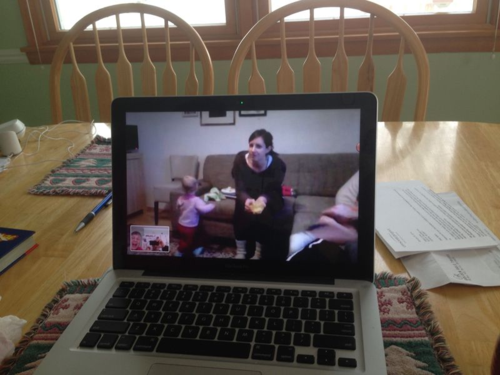 This is a picture of our computer on our kitchen table taken during a conversation with our daughter in Eastern Europe. Standing next to her is our granddaughter. 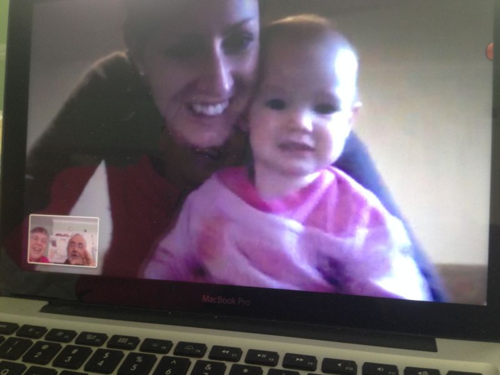 My daughter and her daughter during our Face Time conversation this morning. 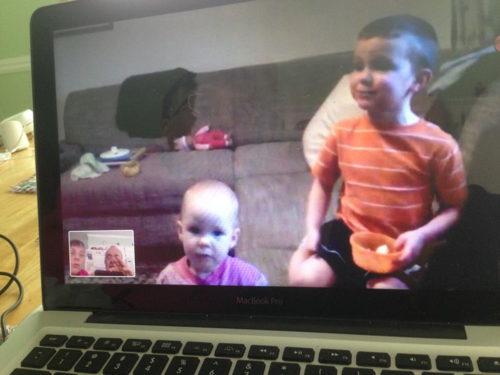 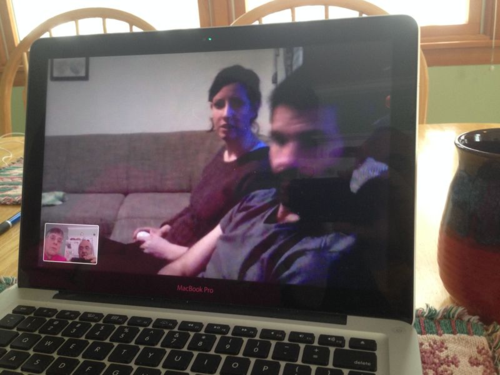 My daughter and son-in-law during our conversation this morning