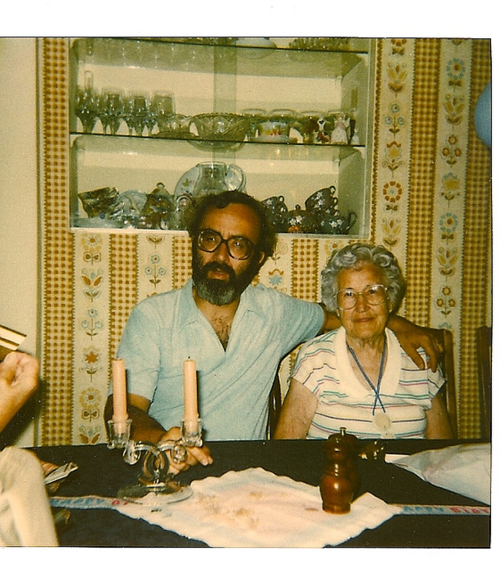 My mom celebrating her 80th birthday and me with hair.

Right now our four-year-old grandson from Bosnia has been visiting our house along with his sister and parents.  He's just getting into super-heroes.  Spider Man has really gotten his attention.  There's one more that he needs to add to his list, my mother and his great grandmother.

She was the real deal and not the figment of some writer's imagination.  She was born and raised on a farm in Michigan Thumb and has five sisters and six brothers.

They lost their parents early, but the whole brood of siblings stuck together with the older taking care of the younger.  The process wasn't perfect, but it worked.

My mom married my dad in 1945 only to have him disappear and never come back.  Social services were non-existent.  She was on her own in her burning goal to see me raised in a healthy way and to get an education.

She did it.  I have an amazing family.  She lived long enough to spend lots of time with my daughter and son.  Now there's a son-in-law, daughter-in-law and three grandkids.  They are stellar.

Today's her birthday.  She's worth thinking about and I thank God for her everyday.  She accomplished her goal and now she's being rewarded in heavenly-places.  "Happy Birthday, Mother.  You were a world-changer for me."

VIDEO: Vinegar to the rescue on a variety of daily needs

Who says there's nothing valuable on Facebook? My old friend, Walt Sorg, posted on his Facebook this YouTube video about how vinegar can save the day in a variety of daily needs, especially those "oh, man" sort of moment. This is worth watching.

This is what the YouTube video says about the video and how to use vinegar. 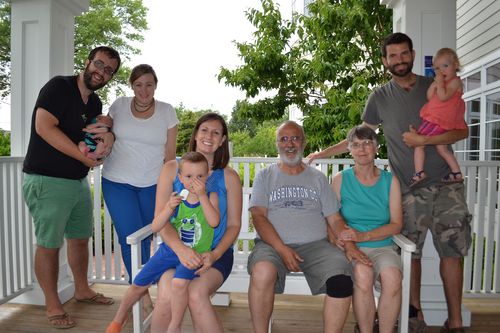 We were at the Magic House in St. Louis with our kids and grandkids when our daughter-in-law suggested we get a picture of everybody together.  She set the timer on the camera and this is the result.  I love the informality of this shot.  We will get a print made and hang it on our wall.  I really treasure family photographs and this one will have place of honor.

As a dad and grandfather, I should be dancing through the streets right now

If the past month with our kids and grandkids is a hint of what heaven's going to be like then I think I'm going to like it there.

My daughter and her husband and their two kids have been at our house for a month plus.  They live in Eastern Europe and are back in the United States for a few months.  We've had a chance for some serious grandparenting time and have seen firsthand how much our daughter that I used to call "super-pumpkin" has grown as a full-fledged adult.  Her husband is an amazing guy and one who I've forged a solid friendship with.

During this time, we all trekked down to St. Louis where our son and his wife live along with their newborn son.  There were so many special times where just enjoyed being with each other, including a special "father-son and son-in-law" time at the Urban Chestnut Brewery in the city.

I know that family routines have been toppled a little, but the time together has been magical for me.  I see more clearly than ever the importance of family and I see how much I have to thank God for.

I kind of feel like Zeke Braverman of the Parenthood television show who play the role of a patriarch in his family.  My response is simple.  As I would tell my four-year-old grandson, "super-cool, awesome, amazing."  You get the idea. 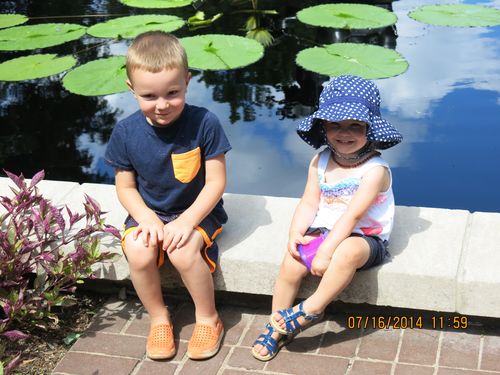 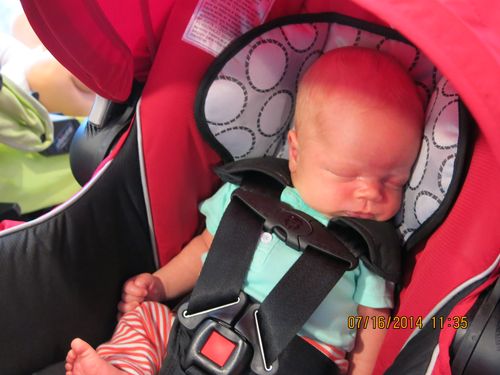 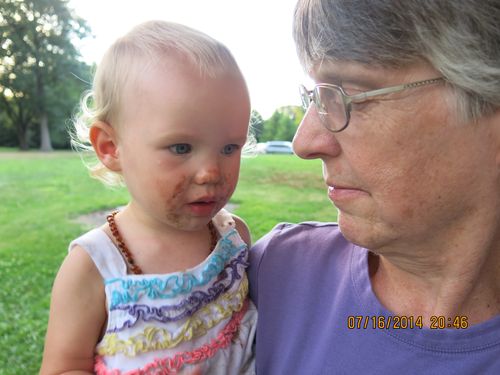 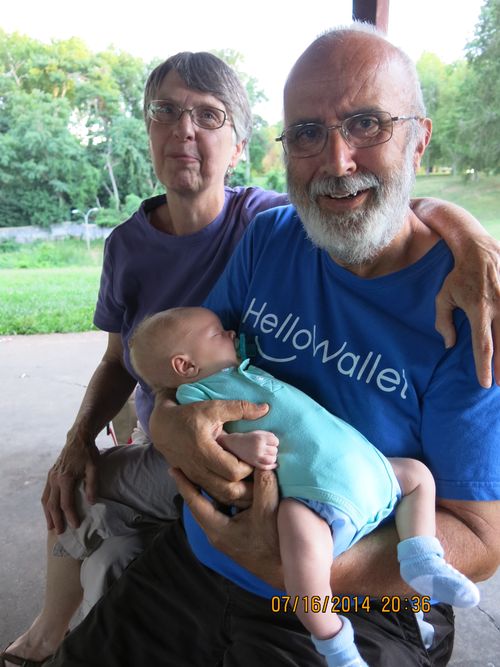 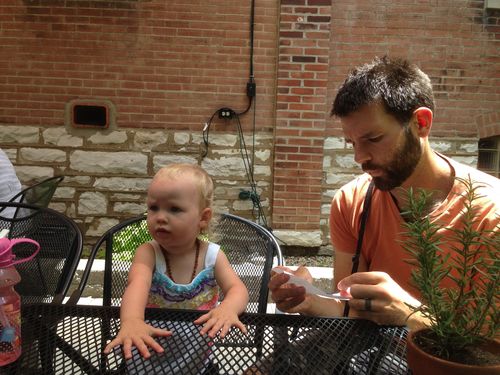 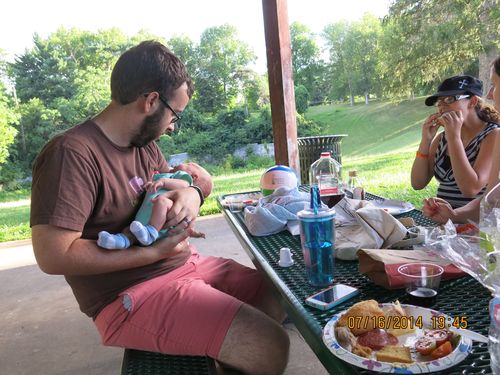 Posted at 10:24 AM in Father stuff, Grandparent stuff | Permalink | Comments (0)

My five decades since I graduated from T.L. Handy High School in Bay City, Michigan We have two grandsons and one granddaughter. I love it when this guy calls me grandpa.

My 50th high school class reunion is early this fall and as part of that we have been asked to write a summary of our lives during that time.  Here's my first draft.

I don't know where to start about how I spent my last 50 years since graduating from high school.  There were the years when I was in and out of prison.  There was the small boat ride through the Bay of Pigs in Cuba.  There was a whisper in my ear while sitting in a small bar in Bosnia asking me if I was a spy.  Then there was my audition for a hugely popular televsion show.

But I'd guess that many of you are just like me in trying to pin down individuals and where they fell on the high school radar.

During my junior and senior years in high school I was the one wandering through the halls of the school and attending activities with a Nikon camera around my neck.  I was the photographer for the school paper, the Handy Pep.  I was actively involved in politics and in getting Republican candidates elected to office.

My interests and involvements stayed pretty much the same over the past 50 years with several significant additions.  I got a journalism degree from Michigan State, worked at a wide-variety of newspapers, including the Chicago Tribune, a newspaper chain in Michigan and managed the pressroom at the State Capitol for many years.  I went on to become a career legislative staffer working for a variety of lawmakers on both the House and Senate side.

The world-changer in my life has been my marriage to my wife who was a teacher at Immanuel Lutheran School in Bay City.  Of all the things I've done I'm most proud of my family, my wife Gladys, two kids, both grown and married, their spouses and three grandchildren.  That's where the real action and satisfaction has been for me.  Just ask to see their pictures when you see me at the reunion.

I was in and out of prison at various institutions.  I was a volunteer for Prison Fellowship.  Many of those years were spent helping incarcerated dads learn or gain fathering skills.  I did take a boat ride through the Bay of Pigs in Cuba.  Another reporter and I took advantage of a small window to get a visa to that country.  We spent more than a week there and were interviewed by NPR when we got home.

And it was kind of scary when I was sitting on a bar stool in a small village in Bosnia with my son-in-law drinking what the locals drink when a Telly Savalas looking guy asked me in broken English if I was a spy.  He was serious.  My son-in-law, our daughter and their kids are in the country to do humanitarian work after the war there.

My son and I auditioned for the Amazing Race.  We had a whole lot of fun filling out the application and doing an audition tape.  We didn't even get a nibble of interest.

I'm really grateful for my Handy years.  It served as a launching pad for my later education and for my career.  I count it as one of the 10,000 reasons that Matt Redmond sings about in his song with that name.  Looking back I have more reasons than I can count to thank God for what he has given me.  Four years at T. L. Handy is at least one of them. 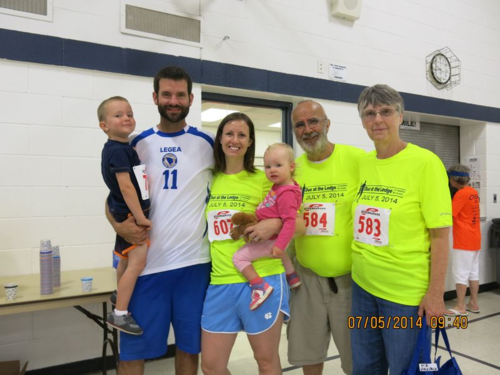 During a visit from our daughter in her family, my son-in-law ran a half marathon. At the end, it turned into a special "father-son" moment

A half-marathon is a special event all by itself and my son-in-law Adam Jones made it even more special as he approached the finish line of the race.  Our grandson has a special relationship with his dad and that stood out in bold relief as Adam scooped up his son about 50 yards in front of the finish line.  He carried him across.  The smiles from both father and son spoke tons about the moment.

What's the big deal about being a grandfather?

This description of grandparents from father.com helped me clarify in my own mind how I see my role as a grandfather to three great kids.