My experience with getting punctual plugs for my chronic dry eye

My chronic dry eye was getting worse and worse.  I was taking more and more over the counter artificial tears and if I missed a dose when I needed them my eyes would scratch, feel like they had sand in them, my vision would sag and I would be miserable.

I entered a new chapter of my dry eye experience yesterday when one of my ophthalmologists Dr. Joseph Wilhelm of Lansing Ophthalmology inserted punctal plugs into my tear ducts.  The idea is to block the ducts to retain more of my tears in each eye.

When Dr. Wilhelm proposed the plugs, I checked out You Tube videos about the procedure.  I was impressed  by how uncomfortable the procedure looked, but I still decided to give it a try. 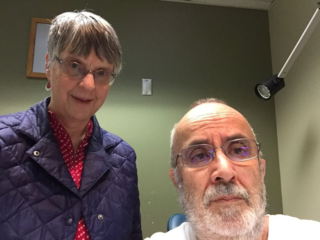 This was taken yesterday with my wife just before the procedure.

I told my kids and their spouses about my decision.  They were aware of my eye challenges including a lense that would not stay in place, chronic open angle glaucoma, a detached retina and my dry eye.  They knew I went through periods where my vision would be degraded.

Before the procedure, they all texted me that they were praying for me.  This included my son's mother-in-law who is a good friend.  They even texted me pictures of grandkids who they knew would make me smile.

I did feel a level of anxiety going into the procedure.  I was ready for anything.  Then Dr. Wilhelm started.  He lowered the back of my examination chair and it was "go" time.  As quickly as it started, it was over.  I felt nothing.  The plugs were in.  That was it.  I go back in six weeks.

This morning my vision seemed a lot better and there was none of that dry sensation.  I will continue taking artificial tears as I need them.  But, hopefully, it will be a longer period between doses.  In the last hour, I've noticed a couple of tears coming from my left eye.

This is not a recommendation for this procedure.  It's an account of my experience.  So far, it has been good.

Wednesday, March 30: Worshipping golden calves in Lansing and punctual plugs in my eyes 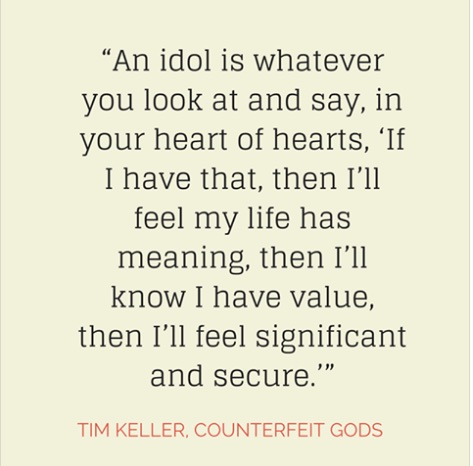 Remember the Bible story where Moses comes down from Mt. Sinai and finds that the children of Israel are worshipping a golden calf?  Growing up I never saw any golden calves in northern Michigan nor have I seen any since I've lived in Lansing.

At our church-Ada Bible Church-we have heard in the past year sermons about ancient gods and we've learned how the Greeks and the Romans worshipped them.  There were gods for everything.  I haven't seen any of those either.

Then Pastor Jeff Manion brought the definition down to a contemporary level and then my eyes were opened wider.  Then I could relate.

To define the term idol, he used the above definition from author Tim Keller says that an idol is anything I look at and say to myself that if I had that, then my life would have meaning and I would feel significant and secure.

Over my morning coffee today, I thought about that.  What are my idols that I put ahead of God?  Can my family be an idol that I place above God?  My wife?  My kids?  My grandkids?  My iPhone 6 plus?  My vision?

There's room for only one God in my life and I want to make sure it's the real one.

What about my vision?  Later this afternoon, the ophthalmologist will put punctual plugs in the tear ducts in each one of my eyes.  My dry eye has reached the chronic level and is affecting my vision and can make it uncomfortable to keep my eyes open even with artificial tears.  It's one more piece in my journey to obtain eye and vision health.

It's done in the doctor's office.  I've looked at the YouTube videos of the procedure.  Looks a little creepy.  I just hope I don't sneeze.

What did I say to my two-day old grandson while holding him for almost an hour? 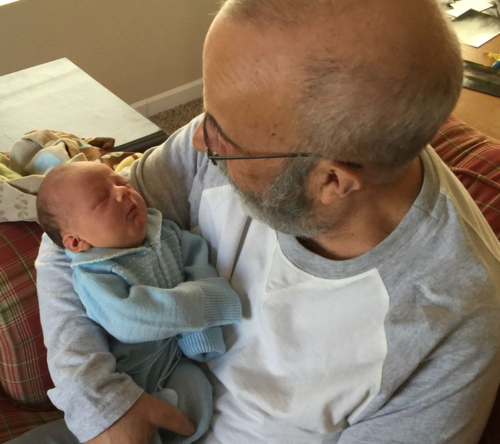 My youngest grandson and I sat on the couch yesterday at his house talking for almost an hour.  Even though, he was only two-days-old, he's a good listener.  It was almost an out-of-body experience to hold the newborn child of your child.  This was the fourth time I've done it.  He's the third grandson.  I also have one granddaughter with another on the way this spring.

What did Jacob Wesley and I talk about?

We chatted about his Grandma Thorp and how great she is and what she has meant in my life and that of other people.

I told him about his Uncle Justin, Aunt Lauren and his cousin Miles.  We also talked about his other grandparents who live in North Carolina and how he would see them soon.

There's still time to talk about Facebook ice cream, the Spartans, driverless cars, a guy named Goldwater and the Island of Vis.

After spending time with our daughter and family, I feel like I just won the grand prize in the state lottery.  I love being part of our family.  Having grandkids is like eating a big gooey carrot cake with thick creme cheese frosting.  They make me smile big time.

My new grandson and I share a name.  Wow.  His parents gave him my name for his middle name.  And I was named after my Uncle Wes.  I can't wait to tell him and my other grandkids about him and my other aunts and uncles and the my mother, a very special person in my life.

Yes, God has blessed me big time.  I'm way past the 10,000 Reason that Matt Redmond sings about.

Jacob welcome to our family.

Our St. Patrick's Day has never been the same since March 17, 1982 when our daughter was born 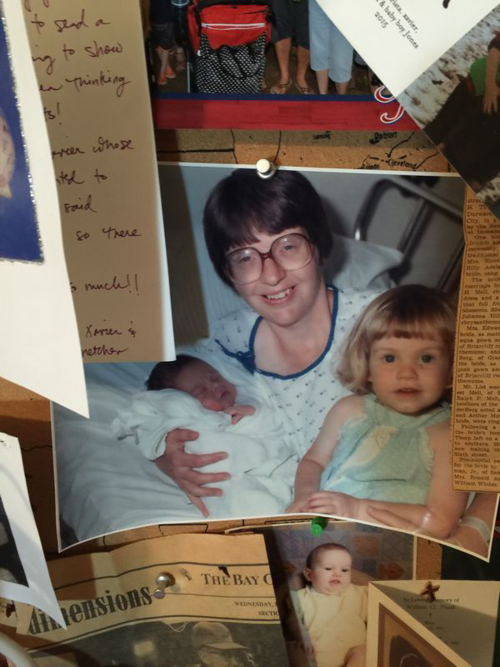 The little beauty on the right is our daughter Krista who was born on St. Patrick's Day in 1982. The baby being held by my wife is our son Justin.  Check the baby below, our daughter when she was three months old.

It's 8:48 am and mom and I have been talking about your birth 34 years ago today.  And we've also gone through a checklist of memories since that day.  One of my favorites from that era was from the period right after your brother was born.  Mom would be feeding Justin and I would put you to bed.

But before I turned out the lights in your room, you would ask me every night to talk about the day you were born and I would tell you.  The more we talked about that day, the closer I got to appreciating life and what it means.  That process started the day when mom went for one of her first pregnancy checkups and I heard your heartbeat.  I know that my eyes lit up big time from the realization that there was a life in there.

Then you were born.  During labor I saw a side of mom that I had never seen before.  After being in the hospital for about twelve hours, I saw the top of your head.  They rushed mom to the delivery room and told her that if she had one big push, you'd be here.  She grabbed onto the handlebars of the cart and gave it everything she had.

Dr. Rajan then smiled and said we have a daughter.  He sat you on mom's belly and then cut your umbilical cord.  And you really wailed with  your lower lip curled down.

Those were your first moment in this world.  Keep in mind that I was an only child and held a baby maybe one time before.  I pushed your bassinet down to the nursery after mom nursed you.  It was a proud moment in my life, comparable to the time when I walked you down the aisle.

That was the start of an adventure where there are still chapters to be written.  You are a wonderful mom, a loving wife and great daughter.

As you get closer to delivering "Al", I want you to know that you have been a world-changer in our family.  You and your brother Justin are gifts from God who knew exactly which kids we needed.

We are proud to call you our daughter.

I'm still smiling from our family get-together over the weekend 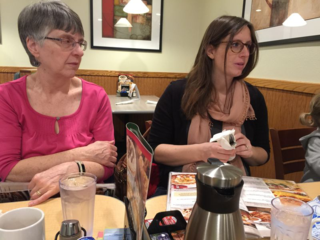 I am proud of both of these women, my wife and my daughter.

I don't know when I lost my natural smile, but I know when I refound it.  My grandkids played a big role in helping me find my way back to my inner and outer smile.  I'm still smiling from this past weekend when we were all together.  I can't believe that this all started with just my wife and me and now there are eleven of us.

I'm often reminded of the song 10,000 Reasons by Matt Redmond where he talks about having that many reasons to praise God.  I've wondered how long it would take me to get to that number if I sat down and made a list.  Would it take more than a morning? 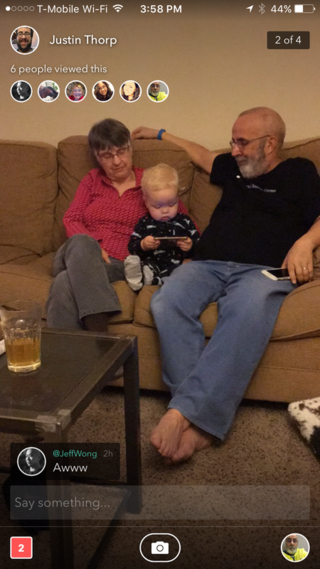 My wife and I spend some time sitting with our youngest grandson. 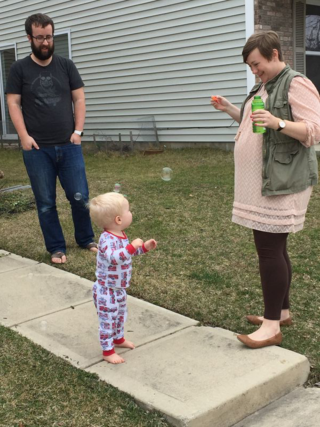 There's nothing like playing with bubbles when you are a toddler. 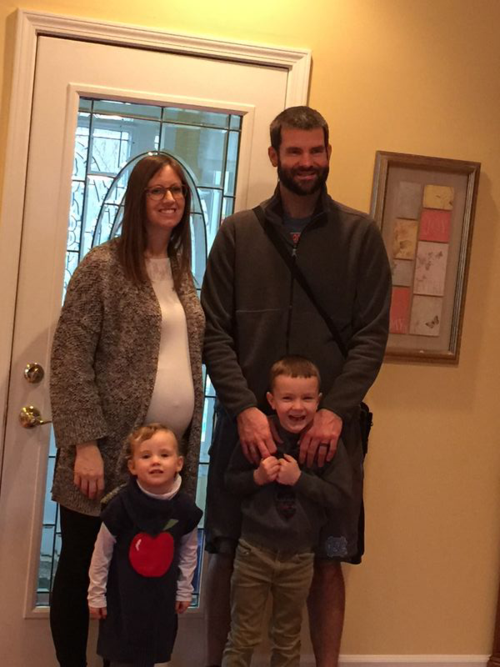 Our daughter Krista, her husband Adam and their three kids, one of whom is in utero.

It would take a server with lots of space to house all the family memories we have.  Most recent chapters center around spending time with our two kids and their spouses and their kids, our grandkids.  This past week we added a new chapter when our daughter Krista Jones, her husband Adam and their kids moved back to the United States from Eastern Europe where they had been for five years.

They have resettled in the Indianapolis area where we spent several days.  I loved it all.  Time with our grandkids was major league great.  Being a grandparent has been one of the best roles ever.

Watching how our kids have grown and settled into the challenges of everyday life has turned into voice playing inside my head saying "praise God."

We were joined by our son Justin Thorp and his wife Lauren and son Miles for the weekend.  What can I say?  I love being part of a family. 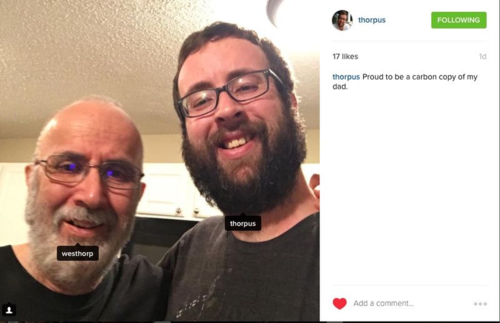 My most recent selfie with my son Justin.

Do you have any selfies with your kids, grandkids, siblings, pastors, doctors or others?

This past weekend our family of eleven had a get-together.  We celebrated family, kids, birthdays in the past and yet to come and how much we have all been blessed.

While in my daughter's kitchen, my son pulled out his iPhone and told me he wanted a selfie of me and him.  What a compliment!  He then put it on Instagram.  I'm really proud of my whole family, but I carry a special pride for my son Justin Thorp.  We've had a close relationship from the day he entered the world with his umbilical cord still attached.

In addition to being a stellar son, he's an amazing dad and husband.  He's a hands-on dad and is not afraid to get poop under his fingernails.

I love selfies taken with others,  I've got many with my wife, with my grandkids and even my ophthalmologist who performed a tricky surgery on my right eye.