There's lots of bad stuff happening in this country and around the world.  Need to recalibrate today?  Play this song real loud and watch the passion of the person singing "Oh, Holy Night."  Come to our house and you'll hear it playing more than once. 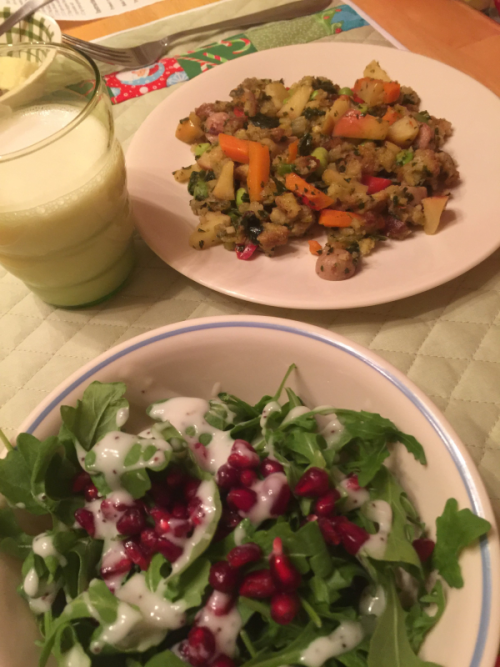 When my wife and I shop at Meijers in the little town of Mason, we always see pomegranates in the produce section and I've pretty much ignored them.  They were never part of my experiential base when it came to eating.

I had them once when our son Justin prepared Thanksgiving dinner at his apartment in Washington, D.C. I didn't remember their great taste.

Then last night my wife put them on our salads for supper.  Wow.  They added a pop and a sweetness to the greens that made it fun to eat.  Then I had them with the Bran Buds that I had for breakfast.  The blandness of the cereal was muted with these tasty morsels.

I need to go to Pinterest to find out how others use them.

A little more than two years ago our family--my wife and me, our two kids and their spouses and three grandkids--spent a wonderful week together on the same island where Mama Mia 2 was filmed and which will be released this summer.

It has to be one of the most beautiful parts of the world, an island in the Adriatic Sea between Croatia and Italy and just north of Greece.  Our daughter found a dacha, if you will, that fit everybody nicely.  It was incredibly comfortable.  Parts of it go back to the time of Christ.

Everyday, we'd walk by olive trees and small restaurants that specialized in freshly caught seafood.  There was internet service but very little else that lent itself to the age of high tech.

Now Mama Mia 2 was shot there.  We recognize many of the places.  I'd love to go back.

At the very least, we will see the movie.  Above is the trailer.

Casey Neistat's Beme News seems to be going down the tubes

I've been a real Casey Neistat fan for some time.  I have faithfully watched his vlogs almost from his number 1.  He developed a unique approach to telling a story in video.  Through his vlogs, I feel like I know him and his family.  He has lots of imitators.

In the past year, CNN bought an app from him called Beme which was quickly discontinued.  However, he was supposed to start a Beme newscast that would appeal to millennials .  The first five or six while it was under development were interesting.  He had my attention.

Now, it seems like there's more entertainment than news reporting.  The Beme reporting on the hurricanes in Texas and Puerto Rico were immersive and made you feel for what people were experiencing.

Right this minute, one of his "anchors" for the newscast is reading the whole tax bill that was just passed in Congress.  That will take hours.  We get the point about the legislation.

Casey, if you're still doing this, inform your viewers with the truth as you see it.  But be sure that you tell the "who, what, when, where, how, why and so what."  I'm not seeing this.  You're not making the younger generation more informed.  You just supplying video that's somewhat interesting. 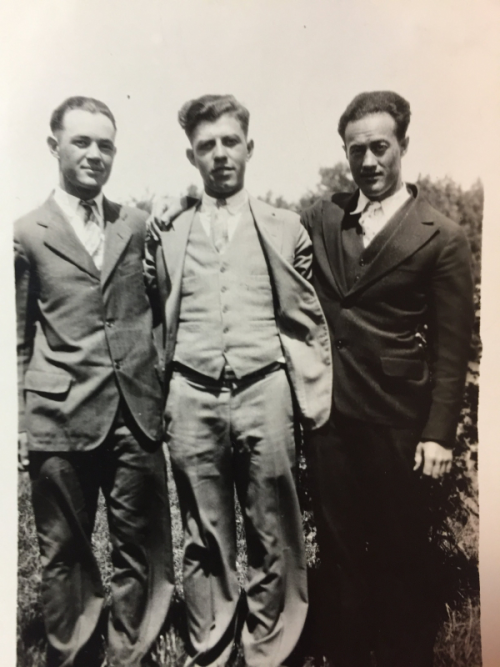 As I continue to go through my late mother's collection of photographs from her early life in the 20's to 40s, I came across this one of my two uncles, Ernie Moll on the left and Wes Moll on the right with Adolph Hanke in the middle.   It was taken in the Thumb of Michigan in 1930.

I am a namesake of my Uncle Wes having been born on his birthday in 1946.  He settled with his wife Bertha and two daughters in Bay City, Michigan where he was a Gulf gas station operator for many years.  When he retired from that he started making children's toys from wood.

My Uncle Ernie worked at Shovel's in Bay City until he had a heart attack at an early age.

Both were amazing men who grew-up under circumstances that deserve to be shared on a television drama.

What if Presidents Trump and Kim Jong-un of North Korea had a dance off?

This past year it has been hard to ignore the trash-talking that's been happening between Presidents Trump and North Korea's Kim Jong-un.  It's hard to ignore when the consequences of their verbal recklessness could result in nuclear missiles being tossed back and forth.

What if we tried a different approach like a dance off?  Would they be able to set aside their egos for an hour and dance to Lionel Ritchie's great hits?  Would they be smiling when the music stopped?  One round could happen here in this country and the other could happen in North Korea.  You can't fight when you're dancing.

Check this video from the Charlotte airport of a woman who got stranded overnight in the terminal.  Her anger at her airline melted when she started to dance and look at the reaction of those who joined her.