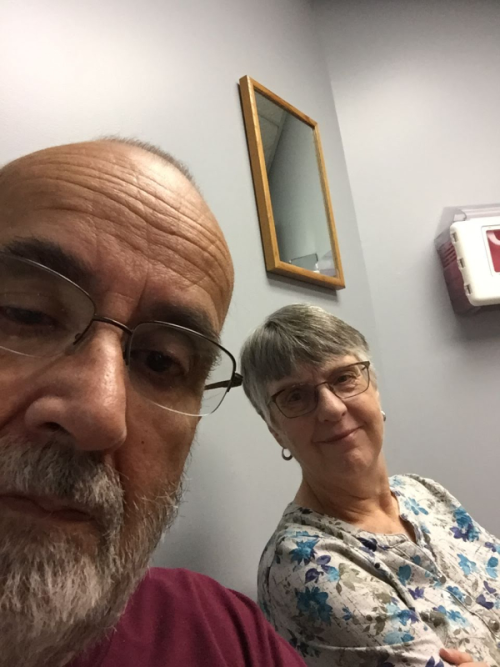 Getting the news yesterday about my two plugged carotid arteries.

As we get ready to celebrate my birthday today with the whole family, our two kids, their spouses and six grandkids-one is pre-born-I realize I have a whole lot to be thankful for.  May God help me to remember that always.

While getting my problem right eye checked by one of my retina specialists for some vision challenges, this young doctor from Egypt suggested that I have my carotid arteries checked out as a possible source of the trouble.  I noticed that on our most recent trip to visit our son and family in St. Louis that looking ahead my vision would fuzz out and the fuzz would go away when I moved my head.

Well, I got a doppler on Wednesday afternoon and by the time I got home and peed, I got a call that they found a blockage.  I was told the doctor needed to see me first thing yesterday.

He told me that the preliminary read of the doppler test showed that I had a 100 percent blockage in one carotid and 50 percent in the other.  Dr. El from LOEyecare in Lansing could have saved my life my urging me to get the test and making the referral.  I was sobered by how this went undetected until this one ophthalmologist suggested the test.  Next steps include seeing a vascular surgeon.

Throughout my right eye challenges, my wife has been alongside me.  She's been to a whole bunch of appointments and exams and to each of my 10 eye surgeries.  I know that she's reflecting the love that she receives through her faith in Jesus Christ.  Her love for me is undeniable and I praise God for it.

Then there's my family.  Our two kids and us has grown to a group of twelve.  They are all coming to our condo to celebrate my birthday and to praise a God who watches over us all, including those of us with transplanted corneas and plugged carotids.

I'm looking forward to it all.  It takes on a special meaning with this new realization of how fragile life can be.

Thank-you God for loving me.

Getting ready for a visit from four of our grandkids We were in the middle of his driveway on a mountainside in western Bosnia when we tried out our diet Coke and Mentos rocket.  My then five year-old grandson and I wanted to see how high we could make the pop go.  It exploded and up to the second level of their house.  That was fun.  He enjoyed it and so did I.

This weekend, he and his siblings--one is pre-born--are coming to our house for a hot air balloon festival just down the road from us in Holt.  No balloon rides this time.  But, I'm searching for things to do with a now eight-year-old with an inquisitive mind.

I have a paperback book filled with science experiments for his age group.  There are some possibilities.  I've looked at personal drones.  Most have a price tag that would rival a good used car and, I think, you need a permit to use them.

What still has the interest of him and his five-year-old sister is making K-cups.  Even though the temperature is still hot, they like making their own hot chocolate from a Keurig cup.

There's always skydiving.  That will probably have to wait til he's older.

What do you do with your grandkids? Checking on my vision with Dr. El at LO Eyecare in Lansing.

It's happened before while driving in the car where I can be focusing on what's ahead and my vision momentarily fuzzes out on me.  When we drove to St. Louis two weeks ago to visit our son and family I noticed it big time.  The fuzz would disappear whenever I moved my head.  To be extra careful, Gladys drove most of the way there and all the way back home.

This follows my cornea transplant almost three months ago at the University of Michigan in Ann Arbor.

How do I feel about this?

Scared!  A little.  And grateful, all at the same time.  If I do have a plaque buildup in this artery that runs from the neck to my head and supplies blood to my eyes and optic nerve, a piece could break-off and I could crossover into stroke land.

Next steps are doppler like tests that take images of the carotid artery.

This week I read the story about Jesus walking on the water and how Peter stepped out of the boat to go to Jesus.  He got distracted by the waves.  He hollered out to Jesus to save him.  If you hear loud shouts coming from my way, it's me calling for His help.

I just don't want to get distracted to the point where I take my eyes off him.

Our almost ten year old Honda Civic got 42 miles to the gallon on our road trip to St. Louis 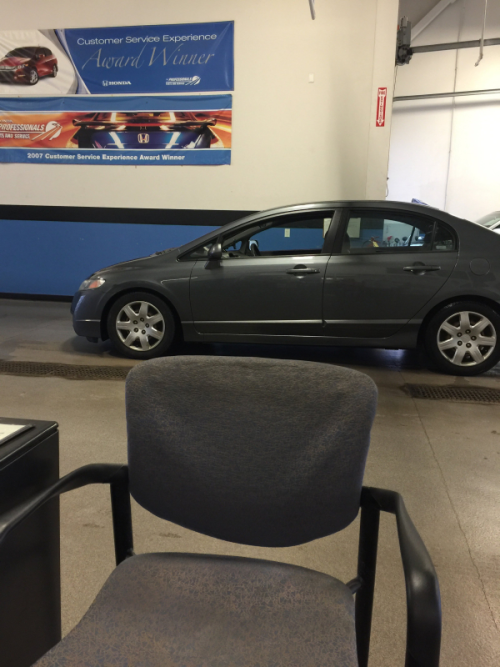 It has a few nicks and scratches on it, but our Honda Civic is still running like the day we got it.

Buying our Honda Civic almost ten years ago from Capital Honda in Okemos was probably one of the best post retirement purchasing decisions we've made.  On our recent road trip to visit two of our grandkids in St. Louis, Missouri, we got 42 miles to the gallon.  I need to be clear that we didn't do anything special to get that mileage.  There's no magic mileage potions that we put in the gas tank, no special adjustments or parts that we added.

From the time we purchased it, we've never missed an oil change and we've followed pretty closely to the suggested maintenance.  It's never not started or left us stranded.  It's never been towed.  I'm happy to say that it just keeps on running.

Our 37-year-old son in law has a Honda that he got in college.  It's odometer has rolled over at least three times.  Can we do that with ours?  I'm counting on it. 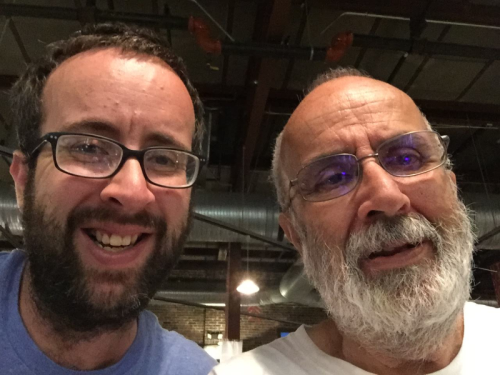 Here's what my new cornea transplant looks like from the front 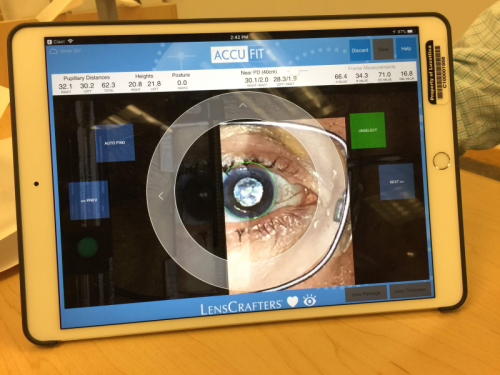 While ordering a new lens for my glasses and my right eye, I got to see my cornea transplant done in May. It's the silver moon-looking spot in my eyeball.

After lunch today, I pick-up a new lens for my glasses and the right eye.  It's all part of the continued healing of my right eye after a cornea transplant at the University of Michigan in May.  I was told that my vision could change again within the next few months, but I was encouraged to get an updated lens for my glasses.

The challenge has been seeing detail and that has affected reading and seeing while driving.  This should help, I am told.  Improvement in my vision has been a game of inches, kind of like football where the game is just to move the ball downfield.

While taking a measurement of my pupil at Lenscrafters, they took a picture of my repaired eye and it showed pretty clearly my new cornea.

My admiration for ophthalmologists has only grown over the past several years.  The U of M's Dr. Bradford Tannen is the latest.  He did the transplant where a layer was taken from a donor eye and grafted onto mine and I was awake and it was done outpatient.  This is the latest on my vision journey.