I'm having to digest the news about my carotid arteries I've been back from the appointment with my vascular surgeon for a couple of hours.  I've had time to digest a reality that's part of me.  My carotid arteries are hardening, one totally and the other partially.

My surgeon said the doppler taken yesterday showed that my left carotid is still completely blocked and always will be.  My right was described by the doppler techs as less than 50 percent.  But Dr. Controneo said after watching the video he would estimate the flow as being 20 to 30 percent restricted.

What does this mean?  I'll be taking a blood thinner for the rest of my life unless the blockage becomes greater.  They would then put in a stent to clear out the blockage on the right side.

My life goes back to a new normal which will be shaped by my appointment with a neurologist on Monday to check if my brain tumor--a menginoma--has taken on a new twist or if I have Parkinson's as a couple of healthcare providers have suggested as a possibility.

Meanwhile, I'm getting ready to walk outside with my wife.  It's a beautiful Michigan spring day and I need to stay active more than ever.

What's next?  I have no idea, other than I need to keep praying and listening for God and his promise to protect and walk beside me.  Maybe I'll sing a little louder in church this weekend.

I have reason to.  He Is Risen! 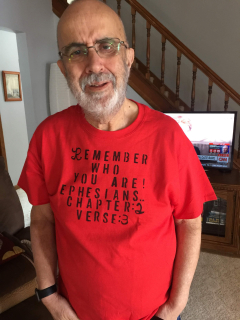 We got home from the doppler test on my left and right carotid arteries.  The unofficial good news is that the blockages haven't gotten any worse.  Of course, my left carotid is completely blocked and that won't change and the right is still letting blood flow through.  Tomorrow, we will find out what percentage of the artery is blocked.  It had been 20 percent.

The other good news is that humans are created with a redundant set of arteries in the neck if one gets blocked.  That's what happened on my left side.  Arteries grew to replace my blocked one and its supplying blood to my face and my eyes.  And then there's the Circle of Willis which takes over when needed.

I don't pretend to understand this all, but I'm impressed with the way God created humans.  There's backup circulation at least for the carotids.  I'm anxious to learn more.

Tomorrow, I have an appointment with the vascular surgeon to make all this official. 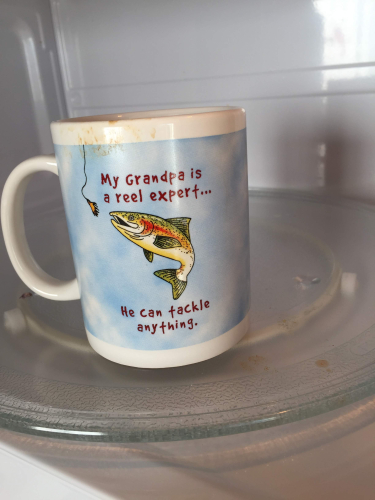 My grandson Xavier gave me this coffee mug and I'll be thinking about what it says when I have a doppler taken of my carotid arteries tomorrow morning.  I'll also be thinking about the phrase from the Ephesians chapter one which can be summarized by four words "Remember Who You Are."

And I'll be thinking about it next week when I have a hour-and-a-half neurologist's  appointment to determine if I have Parkinson's Disease.  For me my health continues to be a distraction.

In recent weeks, I have had increasing difficulty in being comfortably mobile because of skeletal stiffness.  My voice has changed from being strong to barely a whisper.  My balance is way off .  It increased with almost twenty visits to a physical therapy clinic.  My gait is not normal with me walk way stooped over.

Back to my carotids, one is completely blocked and the other a few months ago was 20 percent.  Then there's my eyes.  My cornea transplant seems to be working most of the time.  And my glaucoma affects my vision.

What does all this mean as my gut tightens not knowing what the future will bring?  I know that God selected me as his dearly loved son and I'll be grabbing onto that hope.

Will I continue to write about my health?  You bet.  Doing so, helps me sort out my feelings and to share with my grandkids that people get older and sometimes, they get sick.

My newborn grandson Theo talked me out 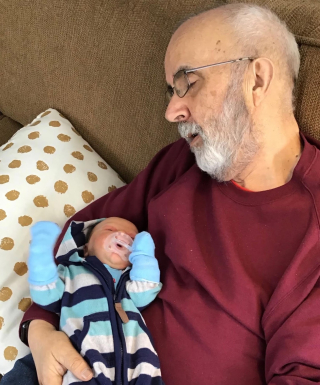 Let me introduce myself.  I'm your mother's father which makes me one of your two grandfathers.  Only six people in the whole world can call me grandpa and you're one of them.  Your grandma, your mother's mom, is Gladys.

You are now a member of our family.  One of the greatest joys I've had in my life is being part of this family.  It's a place where you get a big part of your identity.  You'll always be known as the son of Adam and Krista.  It's also a source of strength and encouragement and laughter.

You and I talked ourselves out the day you came home from the hospital.  We talked about everything, including your parents and your  brothers and sisters and food and countries to visit and cars to drive.  After more than an hour I nodded off with your eyes still open.  You are a good listener.

I love you little man.  Jesus loves you too and so do your parents and siblings, as well as your other grandparents.  You are loved.  Never forget that.  Remember Who You Are.

Again, welcome to our family which is now made better by your arrival.